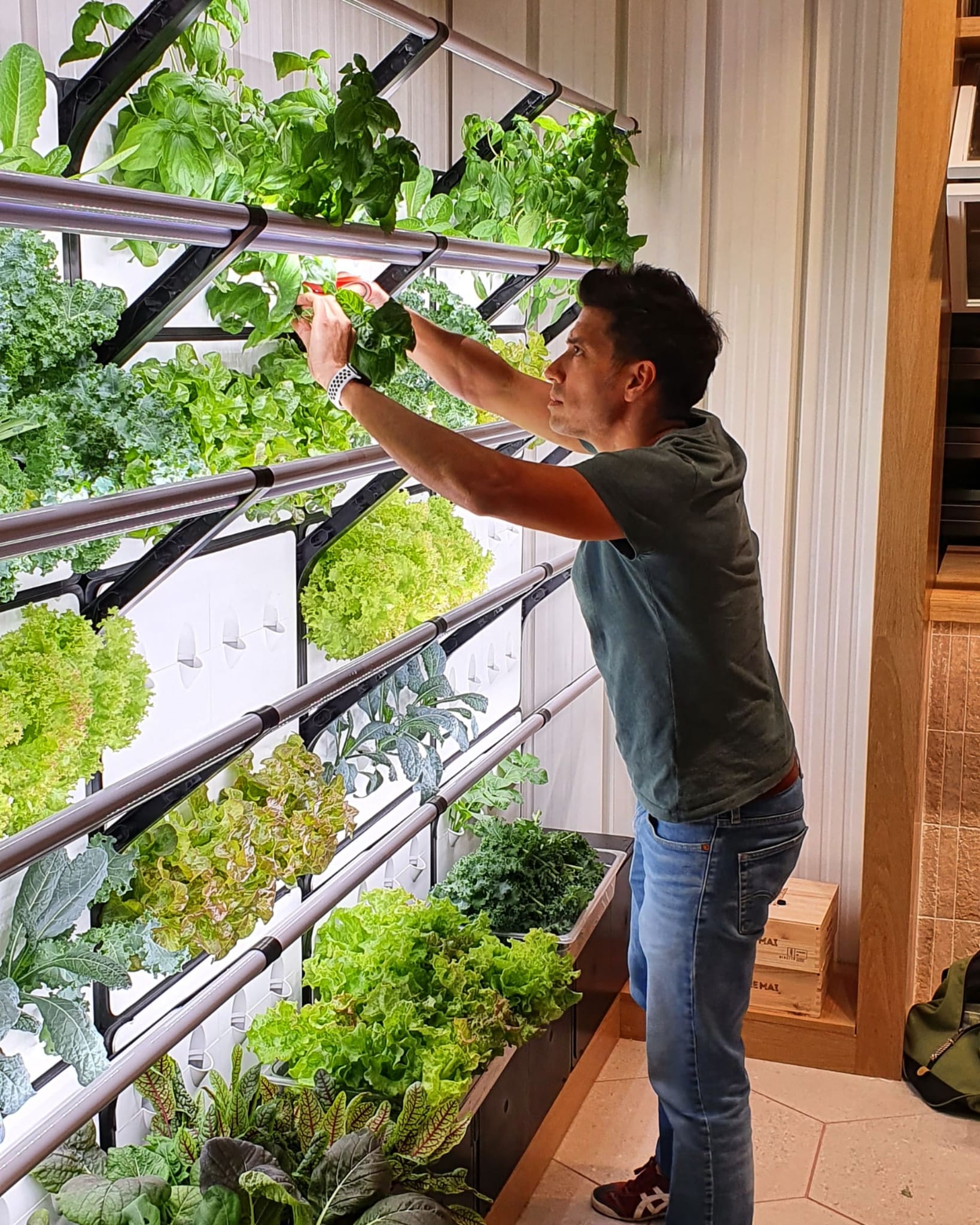 Now, you can even bring urban farming indoors with Grobrix’s low maintenance vertical farming system. We speak to founder Mathew Howe to find out more.

No matter where you go in Singapore, chances are you’ll stumble upon an urban farm—stretched across the open deck of a multi-storey carpark in Ang Mo Kio, perched atop the sky garden on level 51 of CapitaSpring, or even scattered around the halls of residence in Nanyang Technological University. Lush and vibrant, these urban farms do more than just spruce up outdoor areas—they also contribute to Singapore’s food security by reducing our reliance on foreign food imports. The next step? To give Singaporeans the ability to grow their own food as well.

Enter Grobrix, a soilless vertical farming solution that aims to bring their take on urban farming into homes and commercial spaces. While they might not be pioneers in this particular industry, what sets Grobrix apart is that their indoor farming solution blends functionality with aesthetics.

Modular, efficient, and sleek, Grobrix’s aeroponic wall system was designed to resemble a living green wall, without compromising on its power and water efficiency, and ease of use. “By making the system look attractive, I hope that people will want to use it in a variety of interesting places,” shares Mathew Howe, Founder, Designer, Farmer, and self-proclaimed Tinkerer at Grobrix, located at The Curie in Singapore Science Park. This approach has proven to be a success. Since Grobrix’s inception in 2020, it’s been adopted for use not only in homes across the country, but also in a variety of spaces, including Oasia Resort Sentosa, Studio M Hotel, Little Farms in Tanglin Mall, and even the LinkedIn Singapore HQ.

But curiously enough, Mathew never intended to start a business out of this, much less grow the brand into what it is today. “It started as a hobby, and then just snowballed,” he says. Now we’re even more intrigued. We sat down with Mathew for a chat about how Grobrix came to be, the technology behind it, and the common misconceptions people have about urban farming solutions.

Here’s what we learnt:

“I believe every urban farmer’s journey tends to start from one crop. Tomatoes are a popular one, but for me, it was basil.

My girls, Penelope and Olivia, enjoy eating pesto pasta, and I found myself buying a lot of basil from the supermarket. It wasn’t particularly fresh, nor particularly fragrant, but I knew none the better. I was just happy that my children were eating green stuff. The problem arose when the supply of basil became unreliable.

I’d find myself bouncing from place to place, looking for herbs, which was when I realised that there had to be a better way to supply them for my home, so I started growing it myself.”

Call it divine intervention, stars aligning, or fate if you will, but who knew the right combination of food preferences and supply chain disruptions would have such a snowball effect on Mathew’s (and his daughters’) career. Today, Penelope and Olivia are heavily involved in the everyday operations of Grobrix, with Olivia named Head of Quality Control, and Penelope entrusted with the title of Chief Salad Muncher.

“I wanted to involve the girls in the business as much as possible. After all, one of the reasons for starting Grobrix was to feed them! The original idea was that Grobrix would primarily be a consumer product and service for homes, so having them as part of the founding story was important to me.”

Of course, growing and tasting the actual crops are but one part of the business—the bulk of it lies in the actual system that supports the growth of said crops. It might come as a surprise, but Mathew actually designed and prototyped Grobrix’s iconic modular green wall himself, with his knowledge and background in
mechanical engineering.

Looking back, I’d say it was an enjoyable experience that allowed me to dust off some old skills from school, and learn some new ones too.

Without the development of cheap 3D printing technology, Grobrix would not have been possible. The design was developed on two printers running 24/7 for about a year. I think I printed around three times my bodyweight in polylactic acid (PLA) before finalising the prototype. The following six months were then spent with design engineers making adjustments and improvements for mass production.

We are proud to say that Grobrix was designed, developed, and made right here in Singapore.”

2. Aeroponics and hydroponics aren’t the same, and you can grow more than just leafy greens with them

Mathew putting the final touches on the Grobrix green wall at Little Farms in Tanglin Mall.
Image courtesy of Mathew.

“Low pressure aeroponics (AKA drip hydroponics) allows you to grow on the vertical plane rather than horizontally, unlike most hydroponics methods (e.g. nutrient film technique, shallow water culture, ebb and flow) require.”

Technicalities aside, what this means is that aeroponics are grown in air rather than soil, and because the roots are exposed to oxygen, they can grow up to three times faster than your conventional soil-grown plants. Of course, aeroponic plants will still require light and water, which is supplied through Grobrix’s inbuilt LED tubes and automated closed loop irrigation system, which consumes less power than a 100W lightbulb, and uses 90% less water than traditional farming respectively.

“Many things can be grown using Grobrix—leafy greens, herbs, flowers, and select fruiting crops such as tomatoes or chillies.”

3. Grobrix might be soilless, but Mathew is still a farmer! Mathew and Gareth Tarbard, Business Development Manager at Grobrix, with a spread of Grobrix produce at Carv Butchery.
Image courtesy of Mathew. “Currently, the main challenge we face is promoting awareness around our Farming as a Service (FaaS) enterprise offering. It’s a new idea, and the concept is very fresh. We are farmers. We just do the farming at your place rather than ours.

That said, we’re fortunate to have the privilege of working with large companies and organisations such as Shell and LinkedIn, and retail outlets including Little Farms to help us spread an awareness of our services.”

As part of their FaaS offerings, Grobrix offers a rental and subscription-based package for homes, inclusive of deliveries, assembly, maintenance, and bi-annual servicing, with access to a private WhatsApp support line and community forum. On top of that, enterprises get weekly maintenance visits from a personal urban farmer, who will handle everything, from pest management to nutrient optimisation, depending on your needs.

“Our mission at Grobrix is to paint the town green. We want to help urban communities live more sustainable, self-sufficient, healthier, and happier lives, so it’s very fulfilling to see that what we are doing is resonating with many people all over the world. In fact, we are planning to expand overseas at the start of 2023. Where it goes from there remains to be seen, but I am excited to see how it all pans out!”

4. About organic produce and pesticides

“Many people believe that growing food without soil uses chemicals in the same way that pesticides are deployed in industrial farming. Using synthetic fertilisers to feed crops is very different from using chemical poisons to kill insects.

That said, Grobrix does not use herbicides or pesticides of any kind in their services. Rather, they use plant nutrients to keep crops fresh and healthy. Residential subscribers can purchase them through Grobrix’s online store, while enterprises will get their weekly dose of plant nutrients topped up directly by their personal urban farmer.

These might not be questions that instinctively come to mind while grocery shopping, but we’ll definitely be paying more attention to the labels on our fresh produce from now on. Whether you’re inspired to commit to an indoor farming system, or simply decide to consume better produce, we hope you’ll choose to support our local farmers (like Mathew) whenever you can.